Granudrum is an instrument able to estimate the flow ability and the cohesion of granular materials by comparing the wave of powder under motion in a rotating drum. The obtained avalanche angle and cohesive index authorize a simple and fast comparison between various samples. The results give information about the adherence (static part of the flow) and the shear/friction part of the flow).

Therefore, several metal powders (granular materials recognized for the absence of surface interactions) were analyzed by using Granudrum instrument. The principal characteristics of these powders diverge in their grain size, their shape and the nature of studied material.

Figures 1 and 2 show pictures and particle size distribution of the metal powders studied. 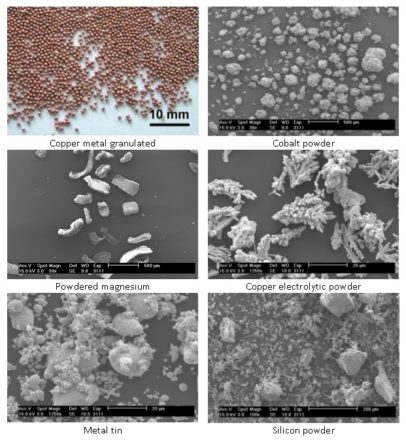 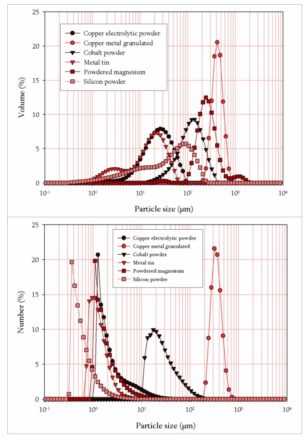 Figure 2: Grain size distributions expressed a) in volume and b) in number

The combination of these data shows that:

Figure 3 shows the evolution of the avalanche angle (static part of the flow) versus the rotating speed for each metal powder.

By considering figure 3, we can categorize these metal powders in 3 main groups:

We can observe on figure 4, that granulated copper, magnesium and cobalt powders are characterized by the lowest cohesive indexes (shear/friction component of the flow). This behavior is due to the particle size (figure 2) and the nature of the particles. Indeed, these metallic powders are defined by high specific gravity. So, when the bed powder is under motion, there is no important cohesion between the particles, even for particles with special shape (magnesium powder-chips morphology): the weight component fixes/establishes the flow ability of these powders and granular materials.

Concerning silicon and tin powders, we can observe that the initial cohesion is very high (shear/friction component of the flow).  This behavior can be due to the presence of small particles in the powders which increase the friction component of the powder. However, as more powders are in motion, as the reduction of the cohesive index is high. This may be explained by the air/voids present between the particles due to the rotating motion. This air acts as lubricant (minimize the contact numbers between the grain particles) and allows decreasing the cohesion between the grains and increasing the flow ability of the powders.

Electrolytic copper is characterized by a high cohesive index due to the particle size but also more particularly due to the special shape of the particles (dendrite aspect – figure 1) which increases the bonding between the particles as well as in the static part (flow angles) of the powder bed as in the dynamic component of the flow.

These results show that Granudrum instrument allows categorizing metal powders depending on their respective shape and grain size distribution. This instrument gives  general information on the flow ability of powders in motion. Moreover, it is also possible to obtain information about the adherence (static part of the flow) and the cohesion (dynamic component of the powder flow) in the powder. With GranuDrum, it is able to measure the flow ability of dense granules and powders in a wide range of particle size.

Granudrum instrument can also be used as a rheometer (using air as dispersive medium) and gives important information on the behavior of powders in motion. So, it is able to define if powder is characterized by a shear thinning, a shear thickening behavior or if it is independent of the rotating speed stress applied on it.

Granudrum allows also to resulting if the powder presents or not a hysterisis loop (differences in the up an down avalanche/flow and cohesive index curves). In other words, if the powder has the same flow ability and cohesion index before and after the measurement. In this special case of metal powders, no hysterisis has been detected. Thus, powders have the same behavior before and after the measurement in all rotating speed range studied. These powders do not incur the effect of the rotating stress.

On other hand, in the case of these metal powders, the shape of the particles, the particle size and size distribution are important factors which can significantly contribute to the flow ability and the cohesion in powders. In these conditions, other specific techniques such as Granuheap, Granupack and Granuflow have to be used to quantify the other components/parts of the flow ability of the powders.