Experimentally, the most practical geometry to study the flow of granular materials is  the rotating drum. This flow geometry has already been scientifically studied. GranuDruM instrument has been developed to measure the dynamic flow properties of a powder for different rotating speed Ω. Therefore, the flow abilities of the powder measured as a function of the shearing rates of the cell (rotating speed) allows to evaluating rheological properties such as shear thinning or shear thickening.

Moreover, GranuDruM instrument measures also the first avalanche angle (yield point) and the ratio between the volume of the powder after and before rotating at a fixed speed, typically V0/Vt which gives information about the powder aeration and the caking abilities. The typical ﬂow of a non-cohesive (free flowing) and cohesive powder in a rotating drum is showed in figure 1:  the non-cohesive powder gives a regular flow (see the linear interface powder – air) with a low value of the flowing angle (Figure 1a) while the flow of the cohesive powder is irregular (see the interface powder – air) with a higher average flowing angle (Figure 1b). 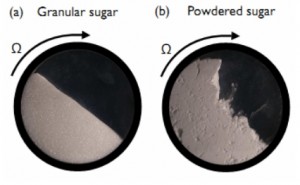 Figure 1: granular (non cohesive) and powdered (cohesive) sugar in rotation in the cell of GranuDrum instrument

The cell of GranuDruM (see figure 2) is a horizontal aluminium cylinder with glass side walls. The capacity of the cell may vary from 10 to 100 cm3 and is half-filled with the powder sample for analyses. The cylindrical cell rotates around his axis at an angular velocity Ω producing the avalanches and the flow of the grains. For each angular velocity, several images of the GranuDruM cell containing the flowed powder are recorded as controlled time-sampling.

On the images (figure 2b), the granular material appears in black. Then, the position of the air – powder interface is evolved by an edge detection. The average interface position and the fluctuations around this average position are computed. From the fluctuations of the interface, the standard deviation (σf) is calculated. This parameter is directly related to the cohesion of the grains powder contained inside the cell. Indeed, in the range of considered rotating velocity Ω, a non-cohesive granular material (free flowing material) leads to a regular flow. From the average interface position, the flowing angle (αf) is measured in the centre of the flow.

Figure 2: sketch of the GranuDrum measurement.

Figures 3 show the flow curves obtained with GranuDruM instrument for 3 typical powders or granular materials: polymer, flour and lactose powders. Figure 3A shows the flow/avalanches angles vs. the rotating speed whereas Figure 3B presents the cohesive indexes vs. the same shear stress. This last curve gives information about the regularity of the powder flow. So, as showed on these figures, we can observe that these three samples have very different rheological behaviours:

Thus, GranuDruM is able to measure the effect of the rotation motion (shear rate) on the flowability (shear stress) and the cohesion of the powders. The different behaviours observed on figures 3 are due to different physical and chemical characteristics of the particles (nature, density, size, shape, roughness…).

From these results, it is possible to extract notably a cohesive index which is able to better understand the evolution of the intergranular or interparticular cohesion existing inside the bulk powder in motion. Therefore, that cohesive index may be used to analyze and follow the evolution of the grains cohesion and to make comparison before and after some particular material treatment (addition of binders, flowing agent, surface coating or effect of the relative humidity). 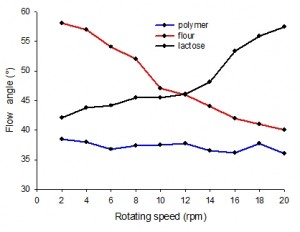 Figure 3a: flow curves recorded as function of the rotation speed for polymer (black), flour (red) and lactose powders (blue). 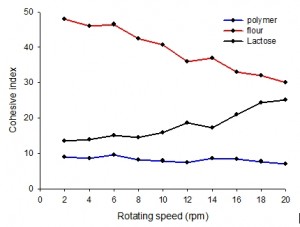 Figure 4 shows two complete flow curves obtained for ceramic powders (fine and spray-dryed Al2O3/SiO2 powders). In this case, the controlled mode of the GranuDruM is used in order to measure the flow curves for a linear increase of the rotating speed from 2 to 20 rpm (up curve) and its corresponding linear decrease (down curve). The thixotropy of the blend is measured by the hysteresis area enclosed between the up and down curves.

We can observe that fine powders (black curves on figure 4) are characterized by a high thixotropy. The up curve is not the same to the down curve: there is no superposition. So, the behaviour of the powder is modified by the rotation motion. This is due to the special properties of the material (submicronic powders). Contrary, the spray-dryed powder (blue curves on figure 4) is characterized by no hysteresis. The up and down curve are overlaid: the rotating shear rate has no effect on the powder. Therefore, the fine Al2O3/SiO2 powders may be qualified as more robust. The thixotropy measured by the GranuDruM is so a big indicator of the robustness of the powders or granular materials. 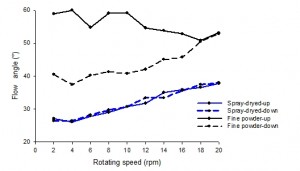