The tap density test is a usefull compressibility tool commonly used in quality control and R&D for developping new formulations. This test can be used for calculating the Hausner ratio (Hr) or the Carr index value and, therefore, for classifing the powders following their flow ability and their compressibility. However, these ratios are calculated only by considering the initial (V0) and final volume (V500) without considering the tapping/packing kinetic. In other words, a small error in one of these volumes (V0 or V500) can lead to false indexes and low reproducibility of the test. To avoid this problem, we developed a new generation of tap density tester: Granupack. This instrument allows following the tapping/packing kinetic in all the range of the measurement. With this instrument, we are able to categorize more easily the powders with identical or close Hr and to realize a better classification of the powders without any waste of time.

In this study different lactoses have been analyzed for determining their flow ability by using new generation of tap density tester. We show that powders with identical Hausner ratio can be categorized with a new index based on the all tap density curve. We can also observe the effect of particle size on the tapping/compressibility kinetic for pharmaceutical powders.

Four categories of commercial lactoses have been used in this study: Granulac, Tabletose, Inhalac and Flowlac. All of them were supplied by Meggle. For each powder, the bulk density has been considered about 1.53 g/cm3. The relative humidity and the temperature during the analyses are respectively about 35% RH and 23°C. Particle size distributions have been measured by the Mastersizer 2000,  in dry conditions (Malvern). 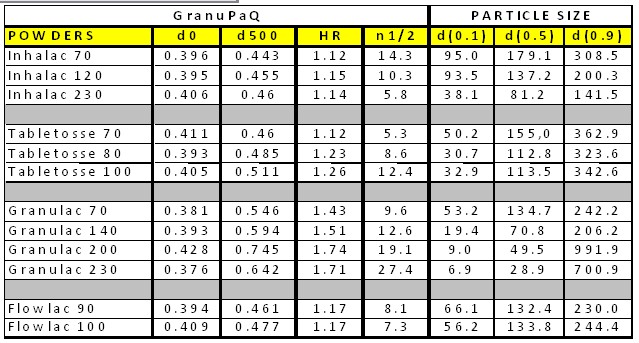 Figure 1 show the scanning electron micrographs of the lactoses excipients. Whereas the grains of the Inhalac and Granlulac powder (Figure 2a and 2b) are sharp and compact, the grains of the Tablettose and the Flowlac powders are componed of hard coarse and spherical agregates, respectively. 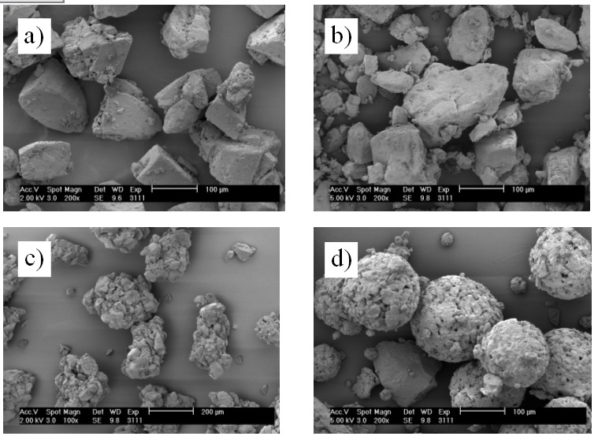 In order to check the evolution of the compressibility properties of the  powders according to the time, GranuPack instrument has been developped. This instrument is able to record an integral compaction curve. A powdered sample is poured in a tube which is submitted to a series of identical tap stress. Before measuring, an initialization procedure is made in order to avoid any bias. During the stress procedure, the volume fraction of the powder is tracked in order to estimate the relevant information: a dimensionless flowability index (n1/2) ranging typically from 3 (high flowability) to 30 (low flowability) is obtained. The Hr (Hausner) can be also calculated.

Figure 2 shows the correlation between the d(0.1) value and respectively the flow index (n1/2) and the Hausner ratio (Hr) for the different powders analyzed with the GranuPack instrument. 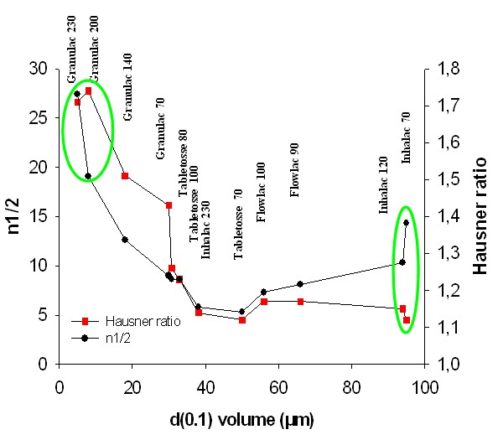 Figure 2. Correlation between d(0.1) value and respectively n1/2 and Hr for the different lactose excipients

We can observe that the n1/2 and the Hausner ratio value depend on the size of the fine particles measured in the powder (d0.1). So, by considering the figure 2, particle size seems to have a significant effect on the compaction of the powders. A strong correlation can be observed between the behavior of the flowability index n1/2 and the Hausner ratio in function of the smallest particles [d(0.1) values] which bring the big component of the friction. Indeed, the Hausner ratio and the n1/2 show a significant increase for powders characterized by d(0.1) lower than 40 µm.  This correlation seems become less good in the extreme area (see green ellipses on figure 2):

Figure 3A shows the normalized flow curves obtained for the Granulac powders. On this figure, we can observe that powder Granulac 200 is characterized by a packing kinetic faster than the Granulac 230 excipient:  it takes more time for powder Granuac 230 to reach its maximum packing fraction than the Granulac 200 powder . So, n1/2 gives relevant information on the compaction and the flowability of the powders (cf. table 1). Figure 3B shows the corresponding results recorded for the Inhalac and Flowlac lactose excipients.

Figure3: Normalized flow curves obtained for a) Granulac and b) Flowlac-Inhalac powders

We show in this study that there is a strong correlation between the Hausner ratio, the flow ability index (n1/2) and the particle size (d0.1). Moreover, we observe that powders with identical Hausner ratio can be categorized by using a new index based on the all tap density curve. We show that compaction kinetic measured by the dynamic tap density tester GranuPack can give important information on the flow powder behaviour.